Lightning Made Us Who We Are 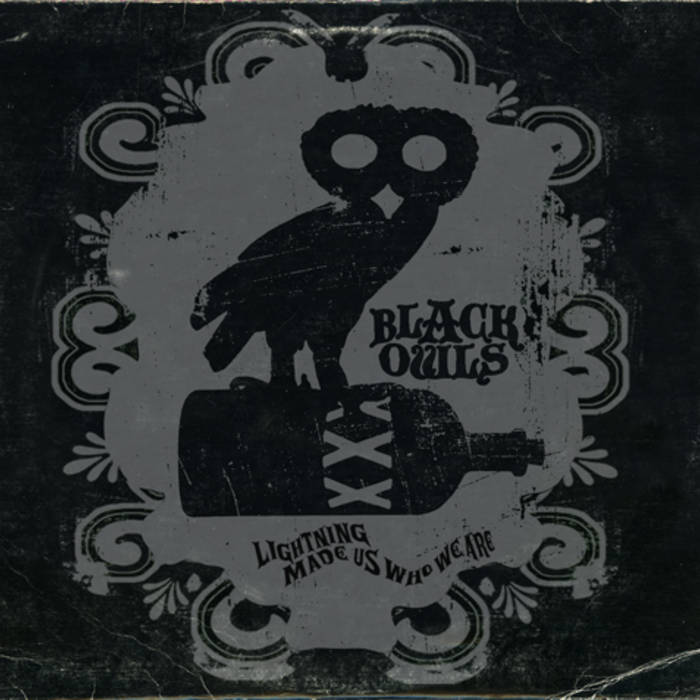 With Guided by Voices long gone, the Black Owls are filling a real void in our lives, creating pompous, over-the-top-rock without making pains to show how tongue-in-cheek they are.
If you’ve never spent any time with Guided by Voices, or the Who for that matter, the album will be just as enjoyable—the Black Owls have a knack for well-crafted, substantial rock songs that are catchy as hell. But it won’t make as much sense. If, on the other hand, you have spent time with those two groups, Lightning is for you.
Rick Allen, the other paper - Columbus, Ohio

Strange, beautiful things take place after the sun goes down, and the Black Owls revel in an all-nighter guitar sound that burns brightly in the dark. Lightning Made Us Who We Are, their 2008 debut album, is a masterful slice of booze-fueled super rock.
In Lightning Made Us Who We Are, you'll find traces of everything from the Rolling Stones to Roxy Music to Husker Du. It all adds up to their own infectious brand of rust-belt glam-rock, with "cautionary tales of excess" sardonically disguised as soaring guitar anthems.
The exuberant "Julius Morningstar" sets the tone for the rest of the record: pulsating drum stomps, righteous guitar riffs, and Butler's slicing tenor. The title track takes on lean, efficient tones reminiscent of the Cars and early Cheap Trick, and showcases the band's ironic proclivity to meld the majestic with the pitifully ordinary.
Kinetic energy courses through Lightning's world of lost mid-western souls and cosmic guitars. The band's unabashed desire to dish catchy, corn-fed power cords while giving songs titles like "We Travel on the Backs of Whales" and "My Guitar Might Kill You" reveals the Owls' sarcastic charm, but there's no denying Lightning's appeal as an exceptionally well-made rock record. - ADAM SCOPPA, 614 MAGAZINE

Insert disc, grab a MILLER HIGH LIFE and press play. Ohio natives THE BLACK OWLS have put together some of the best well crafted songs influenced by some of this country (and others) best known musicians that still make their mark today. This disc is loaded with hints of The Rolling Stones, The WHO, The Ramones and Georgia Satellites—to say the least—with a vibe of your favorite local BAR band playing their hearts out till all hours of the night. Plenty of danceable tracks, a few absolute anthems and creative music abilities that make this band stand apart from the past (and make the future seem more pleasant). Sometimes you have to go back a step and appreciate what was before ever understanding what will be. History has made it's mark, and it is time for the present to do the same — THE BLACK OWLS have a firm foothold in creating a new history for Rock n' Roll. This CD is a complete celebration of music at it's finest and should not be ignored.
- Dave Fishwick the Neus Subject

Judging from the neo-psychedelic sounds found on its debut LP, "Lightning Made Us Who We Are," Granville, Ohio-based Black Owls is an anomaly in Amish country. Rather than dabbling in something rootsy, Ed Shuttleworth (guitars, vocals), Mike Brewer (guitars, vocals), David Butler (vocals, drums) and Dan Cochran (bass, vocals) push a garage-rock agenda that also draws from the British Invasion, new wave, glam and '70's post-punk.
And despite the varied influences, this crew has fashioned its favorite styles into a focused and infectious sound.
The new album, released on the group's own Moholy Pop Records, is sure to get listeners moving. Black Owls recorded at Central City Recording in Columbus with Jon Chinn, who gave "Mr. Tornado," "Julias Morningstar" and other killer cuts a muscular, timeless qualilty that serves the material well. Clever arrangements, outstanding twin guitar play and a keen sense of dynamics heighten the listening experience.
-Don Thrasher - Active Dayton, Dayton Daily News

Mennonite glam rock showcasing a certain proclivity to meld the majestic with the pitifully ordinary.

If you weren't so sobering
and we weren't so stoned
we'd cast off the trappings
& give you all we've ever owned.

hey miss'us someday
you got nerve to string along
you got nerve to sing-a-long
to this love song
Track Name: Lightning Made Us Who We Are
I know you've seen us - you've had t've seen us
walking spanish - talking smack
We're on your radar - dark storms in motion
coming swiftly on jet streams from afar

So please forgive us - our trespasses
It's just nature taking course
It's not on purpose - just being natural
see, lightning made us who we are

You walk on carpets - We walk on splinters
You sense us coming - We smell the fear
The truth has found you - it always finds you
but now you're passed out on the floor.

don't fear the lightning - it's just our maker
it's just our maker making noise
to call us home now - to make us listen
and to eclipse your shining star
Track Name: The Only Sin is Regret
He's all covered in panther sweat
feeling like death but he's not dead yet
He bites his lip while he's placing the bet
His only sin is regret.

He played some social disease roulette.
Got laid with someone that he just met.
Drank till he's blind, see if he'd forget.
now the devil has smoked his last cigarette.

Aggression flies when you get upset.
Blood pressures up and your soaking wet.
Now what you give is what you will get.
for such a bloody & painful debt.

her choice to roll with the gypsy set
seemed nothing more than a minor threat
now she's a chalk line silhouette
washing away down on Lafayette.
Track Name: Altered Statesmen
I have seen them

they roll on chrome 22's in a shit brown chevelle
smells like detroit city - but I'm sure that it's hell
they're altered statesmen - they're purveyors of vice
& the hoods have got their backs - so think twice & play nice.

I have seen them.
And I know what they do - and they'll do it to you.
Track Name: Mr. Tornado
Broken homes stare at cash advances
rusted fenders and plastic toys
storage lockers are for rent in the backyard
they're protected by the dirtiest girls and the most savage of boys

We're waiting on something better
Our numbers to come up, for our lucky break
We're waiting for mister tornado
We've nothing left good but plenty to take

the funnel will blow off our misery
and it'll sweep clean our terrible lives
it'll sand blast our horrible children
and steal our detestable wives.

and on that day it'll be lucky and it'll be funny
and on that day we will clean up the slate
and on that day there will be no good warning
when the sirens blow baby - it's already too late
Track Name: We Travel on the Backs of Whales
We travel on the backs of whales
'cause they're big enough to hold us
and they like to breath the same air
and they seldom get upset.

The devil never gets in our way
cause he, don't like to mess with water
and the whales they don't care about him
he's no fisherman out for the slaughter

I'll remember to this day - being so blown away
It defines you and me so perfectly
Track Name: My Guitar Might Kill You
My guitar might kill you - it has a mind of it's own
many eardrums broken - many speakers blown

strings of slings and arrows - electric voices rise
all just fun and games - until somebody dies.

it's case is like a coffin - lined in velvet trim
my guitar might kill you - though the chance is slim
'cause my guitar is old - it cannot raise the dead
but it can kill the voices - living in your head.

strings of slings and arrows - electric voices rise
all just fun and games - until somebody dies. DON'T DIE!
Track Name: Stay Down Now (She Said)
Fishing for compliments - compliments that compromise
arrogance a-plenty - all these clouds in my eyes
rules of engagement - plays from a playbook
you wrote me to keep me guessing
stay down where you belong - she told me

Why did you lie? - I love you though it's wrong
Hate it when you cry - it makes the night so long

Forecaster please - why do you lie to me?
Down on my knees - reveal the death of glory

Forecaster please - Is that your needle on me?
Forecast the need - if you're deceiving me

Forecaster please - Reveal the monster in me
Track Name: Astronauts of Nothing
We were sent here on a mission to explore
the darkest corners of our own feeble minds
we were given strict orders to follow through
and to report back our discoveries and finds

and through the porthole signs of life in the distance
I swear it's calling out our names as it comes
moving so swiftly that I lose my connection
the bright stars fade out as the empty capsule hums
Track Name: Electrified
The show is on – so start your amplifiers
The sound is RISING & it will take you higher.
A power chord - might be a wave goodbye
You're soaking wet & much too young to die.

The live wire is dancing in the city street
You're hopped up & kicking it with bare feet
In your headphones - the singer tells it true
rock and roll would surely be the death of you.

You want the passion but you don't wanna play
you're bored with each new day at least that's what you say
Take the radio and jump into the shower
instant passion - 50 thousand watts of power!

Bandcamp Daily  your guide to the world of Bandcamp