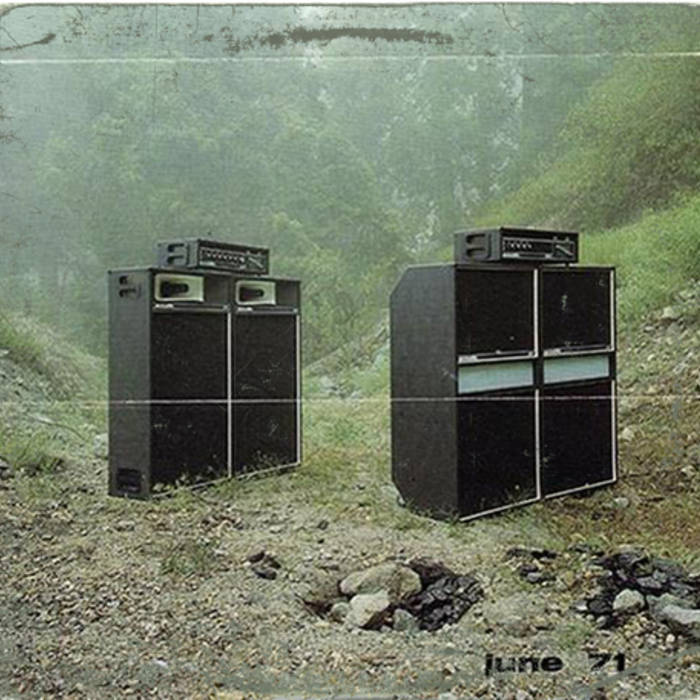 JUNE '71 - Black Owls
Somebody recommended several weeks back that I check out Black Owls, a band from Ohio, describing the music as a mixture of psychedelic blues and glam-punk. Good call.

The band's second album shows off a sense of classic, take-no-prisoners rock 'n' roll, with an undercurrent of just enough artsy pretention. The rambling poetry and insouciance with which David Butler—who also plays drums—attacks his vocals recall Ian Hunter, and the band kicks it into overdrive like Mott the Hoople jamming with The Faces, but with the threat of the English punk-rock movement breathing down their necks.

In comparison to the relative innocence of 1960s psychedelia on the group's debut album, Lightning Made Us Who We Are, this one is darker and a little more confrontational. With the spirits of Iggy, Morrison, Bowie and early Alice Cooper hanging over it, the album feels genuine and a little stoned, as if it's observing a culture in which Woodstock is long over, and Altamont has left the music world with a sour taste in its mouth.

June '71 still has shambling acoustic guitars, but they are subordinated to motorcycle-roar electric guitar by Ed Shuttleworth and occasionally the warm charm of Mellotron, as Butler pounds on the drums convincingly. Decadent and ramshackle and glorious, it kinda makes me cry.
Gene Armstrong - Tucson Weekly Feb 2011

PAINT IT BLACK
Fancy all the black-listed (wink) retro-fusion blues punk bands from North America? BLack Keys, Black Mountain, Black Owls. And they all so perfectly dialed in to the vintage Supro rock sound. Here in the UK it resounds. It reflects upon the 60's London blues movement that spawned the Rolling Stones and countless minion. Two of the bands are from Ohio nonetheless. Admittedly I didn't even know where Ohio was until I did a little digging. And I dig it. Indeed.
Delve further: Everlasting Light on Brothers by Black Keys, Stormy Mountain on In the Future by Black Mountain, Stone on June '71 by Black Owls (Upon further inspection I find that both Black Keys Brothers and Black Owls June '71 were mastered by the same bloke in Ohio too. Something in the water then.)
Analog Ink - Manchester UK - Terel Smith

I've given a listen to this June '71 by Black Owls and admittedly I fucking get it. Not only do I fucking get it, but I want to roll in it like a dog masking scent. It's as rock and roll as it gets. It hides the stench of the wider offerings of indy rock manifest. Here's to the balls nasty. Here's to the Owls. Glorious in Black is my new anthem. - Darrick Thomin, WicksBeat Mag

The internet sea is awash of self-produced Americana rock. The Black Owls steer the schooner across the giant waves of mediocrity. The boat carries a handful of killer deckhands. At least that's what I imagine. I could be confusing them with a Somali pirate brigade, but they carry illicit anti aircraft artillery in the form of heavy guitar. At the very least, they are here to board the cruise liner and loot the mundane. I like these guys. And I've never met the bastards. - Brett, LA Sound

Rock Solids
This is "put your back into it" song craft. These guys lay it out. Lyrics, structure, power. It's almost a lost art, but thank God there are dudes like the Black Owls preserving the national trust of rock. Check out June '71 on their own Amish Girl label on itunes or bandcamp. - Compare/Contrast: Rolling Stones, Guided by Voices, Mott the Hoople, Bowie, Jim Carroll Band - Warren Epstein, Dresdon Press Music

It's no retro trip, it's a philosophy about how rock should be made. About lyrics, about sound, about giving a shit. Just put in June '71 and crank it loud. If you don't remember the '70's you'll get the idea. If you do remember the '70's you'll take another toke and revel in it. This is an album, not a collection of filler and hits. Every song sticks to the ribs. - Jonah, Free Press LTD

Dark and effervescent sophomore release from Ohio USA based Black Owls. Harrowing and infectiously hook-laden songcraft that put them in league with noted Ohioana Black Keys, Heartless Bastards, and Guided By Voices. Influences on their sleeves, bleeding immediacy and passion, Black Owls deliver a proper rock record to get you dusting off your Mott the Hoople, Bowie, Grand Funk, Guess Who, Iggy, Alice, Clash, Television, Jim Carroll, Neil Young, and Zepplin. Against the indy zeitgeist of choir vocals and shimmery haze, this album oozes guts and glamour. Take special note: Magic Lantern, Stone, Her Normal Courtesy. Seek them out. One of our 10 best of 2010. - Matter Sounds UK

Mennonite glam rock showcasing a certain proclivity to meld the majestic with the pitifully ordinary.

Track Name: June '71
Back then we cut off the poets fingers
yeah, it was our idea of fun
but they threw us in jail - no hope for bail
back in June of 71

& Our harvest golden wild eyesight
yeah, we watch charlie take the rap
but the killer calls and the caterwauls
covered up the sound of all this crap

Oh superstar, that's who you are
you're drenched in the mirror blood
I've seen the papers and mind rapers coming
they wanna drag you thru the mud

Pack up your paisley-laden profiles, yeah
put down the bowl - pick up the booze
gas up the whales and hit the tarmac
nothing to gain - no time to lose

so golden tan - wait in the van
'cause they're burning blue and red
& I've got to go talk to this nice man
you see a friend of mine is dead.

It might not hit you while you're dreaming
no babe, good times are not always fun
the fragile flowers they're out there screaming
cut down in June of 71.
Track Name: Magic Lantern
One simple motion - that turns it on - oh magic lantern
it fills the air - with sweet communion - it takes me there
& oh magic lantern - dirty spirits - you've awakened
they see the light - you breathe upon them - before the fall

Your wick of velvet - it burns eternal - it never dies out
Oil of nectar - it's always summer - sweet butterfly
oh magic lantern - turn up convection - & breath upon me
I kissed the sky - it opened up there - now prudence smiles
Track Name: Stone
Stone, it's made of stone It's all you own
I saw you standing on it crying all alone
monsters on thrones they pick your bones
& wipe their lips with all the innocence you've shown

and When I'm cremated - smoke my ashes & you'll see the flashes
of the bridges we burned and faces we turned - to stone
& When you're frustrated - look for your brothers, with devils and mothers
push you in closets deep & shut you in - they shut you in
alone,
get off the phone now don't bemoan
your social grace has now become a dial tone
your cover's blown your birds have flown
you find you're shrinking and the horror show has grown

And when I'm cremated - you'll smoke my ashes & you'll see the flashes
of your prison birthday and the cake with a baked in file
& When you're frustrated - look for your brothers, with devils and mothers
who stole your sanity and left you standing all alone without a single trace of
Style,
it's not my style the rank and file
I'm just the crippled dog that walked a city mile
you took my smile and all the while
I was the guilty man you never put on trial
Track Name: Horrible Pilgrims
You're dressed in black - well how 'bout that.
A tattered doormat - halloween cat
Sorry leather clown - make-up, washing down
clumsy gothic frown - in ritalin you drown

round lips are pursed and blow across your face
she knows her manners - and she knows her place
her normal courtesies are drenched in grace
her fallen halo stings her face, stings like mace
Track Name: Glorious In Black
It's glorious in black
I just wish it hadn't - fallen on my backbone
and it broke down the 2 tone
but it, kept me alive
It's glorious in black
who'd of thought it would bring down the mayflower
despite all the star power
it's too much to drive

your credence set me up as a liar
but you set the stud out to sire
and the black coal dusted sunrise
called me back
but the glorious river of black
gets me back on track....
Track Name: When It Rolls In
When it rolls in - it'll be alright
we'll make the fools spin
with blinded sight
When it rolls in - on fashion tension
we'll speak the words
they would not dare to mention
when it rolls in - through dark alliance
we'll pull the trigger pin
on all this soft compliance
when it rolls in - like smoke on water
our transparent skin
won't hide the secret slaughter

over the rocks, upon the shore
we don't know you anymore
when the wave rolls through the door
and all the truth lays on the floor
we've become what you deplore
brokered lies from long before
the only reason we've come here for...
to see the band that turned to whore
Track Name: Underwater
days going downhill & my will has grown thinner
they're fishing her body now, from deep in the river
sad subject compromise, drains the white from my eyes
and I'll be the first one to admit it

snowfall it froze my mind, left only ice behind
that ice ran through thoughts of redemption
just frozen red bloodstains & gilded ankle chains
a snowman in my lonely kitchen

I'm opening the door, the snow blows on the floor
they'll find me here inside my coffin
but answers won't be found, just questions left to drown
and now I'm on my way to you.
Track Name: You're On Fire
Why'd you turn me into salt? when it wasn't my fault
and now it's raining
Somehow you saw my love as treason the death of reason
but who's complaining
I walked around like I owned the place & you spit in my face
that's not a kiss
I'll cut your strings you little puppet your man's above it
you're just his pet

It's my salt, they're my bones,
it's my fault, nevermind
It's no crime, they're fake tears,
your not here, I'm on time
You're on fire, It's no joke,
I'm no liar, get the hose
It's your blood, they're my hands,
we are everyone, it's a crime.

can you bring that? mind your p's and q's
don't wind me up now lovely to meet you
can you sing that? you're blind and so abused
don't sign me up now it's lovely to beat you
Track Name: Shipwrecks
You're so meticulous - & I'm fashion challenged.
You look like diamonds - and I smell like smoke.
You're wearing linen - & I'm wearing thin.
You're eyes cut through me - I'm just a joke

When you part the ocean - I fall on the shipwrecks
You laugh out loud - when you see me cry.
But I'll rise above it - with lungs full of water
I'll swim to the surface - for one more try.

Now you didn't know me. - You didn't love me.
I'm such a demon. - Destroying your mind.
OH, you're so above it. - It's all so futile
whoever said that - true love is blind.

Oh - carry me up to - the places that we knew
before I was tired - before it was through
when you were meticulous - and I was a demon
and you saw potential - and I saw it too.

Bandcamp Daily  your guide to the world of Bandcamp